In Memory of Aurora Richmond

This is a port of the C64, Amiga and Spectrum puzzle game Vegetables by Mike Richmond for the VIC20. It was converted over a year ago with the aim of a physical release, however as that has stalled we have decided to release it for free with the option of making a donation if you wish, to be shared between Mike and myself.

Requires a VIC-20 with a 3K+8K expansion, or can be played on TheC64, TheVIC20 or any other emulator. 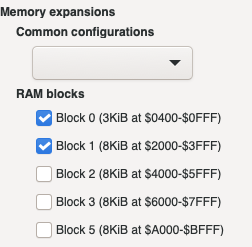 Use the joystick to change which vegetable is selected. Hold fire and press a direction to attempt to swap the vegetable with the one next to it.

While playing, press P to pause and un-pause the game. Press Q from pause mode to quit to the menu screen.

On the menu screen, use joystick left and right to select a game mode.  Press fire to start the game.

The object of the game is to make lines of three or more matching vegetables. To do so, you can swap the position of any two vegetables on the play screen by holding down fire and pushing in a direction. When there are no valid moves left then the board is shuffled – until you run out of shuffles, then it’s game over!

Match three vegetables and they are removed from the board, with new shapes dropping down to replace them. Occasionally an immovable block will be dropped. These can only be removed by strategically dropping them until a line of three or more immovable blocks is made. Match four shapes in a row to destroy a full row or line and match five to destroy all matching shapes and get an extra shuffle.

There are four game modes, offering a gradually increasing level of challenge.

In casual mode, the emphasis is on a relaxing game, with very few immovable blocks being dropped. It is still possible to run out of moves, so don’t get too complacent! 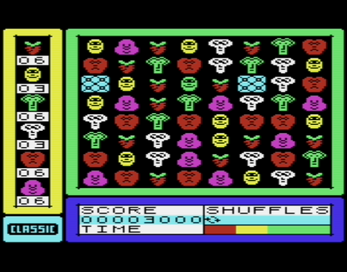 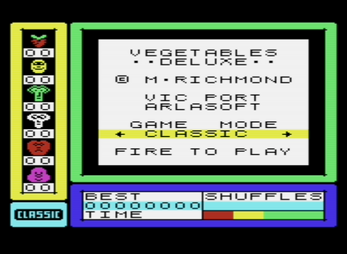 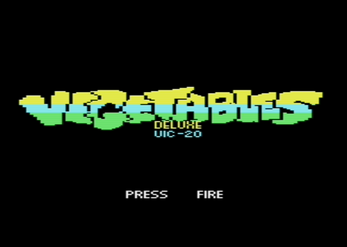