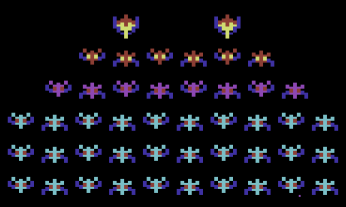 After finishing Galaga I intended to work on Robotron 2064 and Funfair Inc, however a post on the C64 Facebook group about Galaxian got me thinking whether it would be easy to convert Galaga to play like its older brother and improve on the existing, jerky character-based Atarisoft port.

It took just a couple of hours to getting it looking like Galaxian, but in playing the arcade version I realised the enemy movement is very different to Galaga. They have smooth sweeping movements that gradually change speed and direction, and are slightly different with each attack. The only way I could see to reproduce this authentically was to port the arcade code for enemy movements and timings directly.

Fortunately there is an excellent reverse-engineered disassembly of the Z80 arcade code by Scott Tunstall to work from. I don't much Z80 but I was able to learn just enough to convert it to 6502 for the C64. The algorithm that controls the main enemy attacks is a short but ingenious routine that Scott himself admits to not fully understanding (neither do I), but it results in varied and smooth attacks. In order for the PAL version to run at the same speed, parts of the game loop run at 60fps.

I also thought that as the formation does not spread out in Galaga, it might be possible to move them smoothly across the screen instead of in 8-pixel chunks. It turned out it was but it's pretty expensive in terms of CPU time, therefore the NTSC version will have a greatly reduced starfield to free up cycles.

With the skeleton code from Galaga to build around it's taken only two weeks to go from concept to the first release version, including several improvements borrowed from Galaga such as a high-score table, shot stats and the 2-player co-op mode.

With the help of testers Jay Bell, Eric Akeson and Stepz, I think we've got something that is pretty close to the arcade experience, arguably even more so than Galaga. I hadn't played much of Galaxian before the project but have really come to appreciate it. It's certainly a much harder game and requires patience, learning the right moments to attack or stay away from trouble.

Obviously this game is available for free, but if you want to support my C64 development in general you can name your own price for my game Oyup!

What an incredible effort with this insanely good port, Galaxian -DX-!  Galaxian has always been a super difficult game... the original arcade version sucked quarters out of this guy back in the day as fast as I could pump them into the coin slot... lol!  This version includes a "SPEED RUN" mode that is super fun!  It allows you to compete against yourself in a mini-game style that doesn't require a lot of commitment of time.  My record so far is 37.64 seconds which included a 98% hit rate!  Great work ARLASOFT! 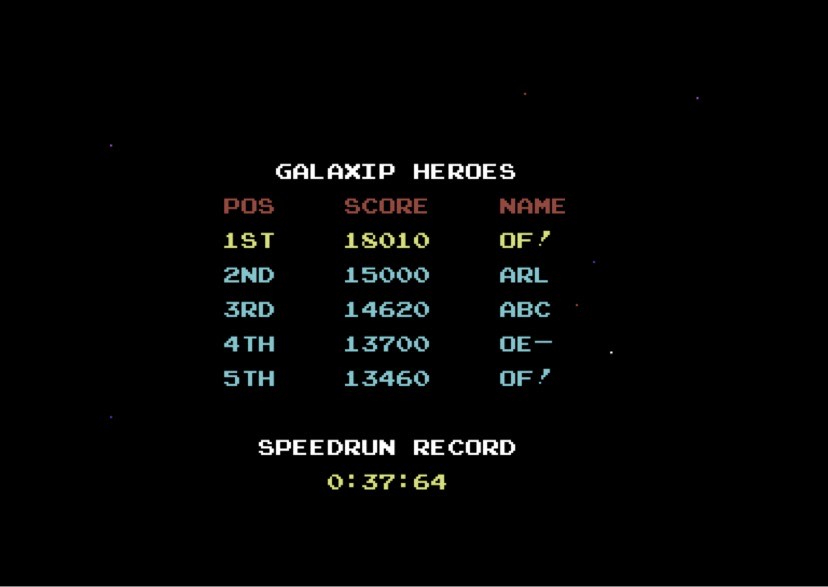 It's a good port.

Is it just me recognizing a short hick-up/stop in enemy wave movement when is continously shoot at the enemies? Maybe sometihng cycle related? Tested on real PAL HW and Vice 3.2.

Do you mean when they all just stop moving for a moment? They are able to sense an incoming bullet and will stop if continuing to move would have put them in its path, until the bullet has reached the top of the screen.

Oh, it's a feature. Now I get it. thanks for clarification. This port is indeed an excellent piece of code. Keep the ball rollin!!

Or am I wrong?

Whoah! This is excellent. Thank you for porting on of my fave arcade games.

Also, thanks for sharing source code too.

Another winner from you!

I have seen a few ports of Galaxian on the C64. Although quite good, none of those matched the quality and performance of this port. Well done. This is one of the best ports of Galaxian I have ever seen on a Commodore 64.

There's already a very good port of Gaplus done back in the day, not sure I could improve it dramatically. Got a number of potential projects on the go....not decided which to focus on yet.

Yes, Gaplus was ported to the Commodore 64 back in 1988/1989 and was released as a budget game by Mastertronic. I have the tape original which the start of this video features the loading bitmap and Rob Hubbard's awesome tape loading music.

This port of Gaplus to my general opinion is absolutely brilliant. The coders did a marvelous job porting the game to the much loved 8-bit computer.

I guess the next step up would be a more faithful port of 1942! That would really test out a sprite multiplexer! That said, the larger sprites and attack pattern data would make it a tough challenge.

The highscore saver will crash the program before it starts if you didn't load the game from a diskdrive though... although in such cases it's just best to disable highscore saving/loading if the last load device is less than 8 (should be able to handle tape loads and cartridge DMA loads then!)

Checks current device. If device is below device #$08, it detects as a tape drive and skips saver. I use this for my C64 projects, when catering for both .D64 and .TAP versions of my games :) I hope this helps.

It's amazing how many high-score savers actually don't cater for this problem and can't gracefully handle disk errors... but the scene doesn't want to know about anything other than drive 8, expect it to always be there, and to never fail. But this is a simple fix, so why not if the game is a one-filer?

A superb port of the classic arcade game finally comes to the 64! Galaxian fans will not be disappointed! 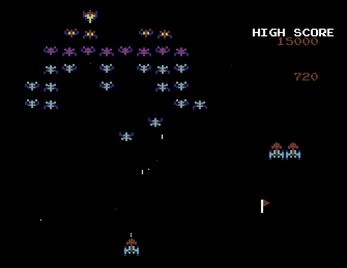 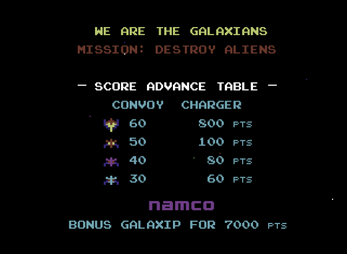 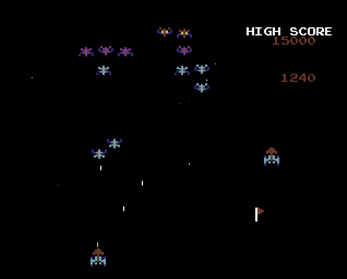 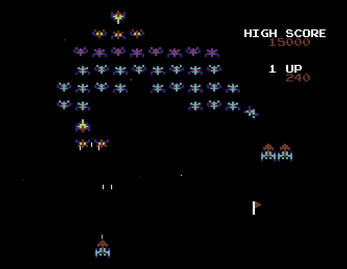 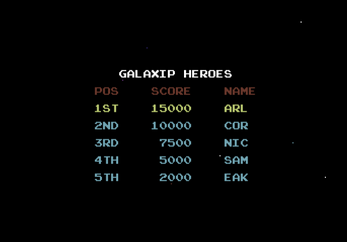 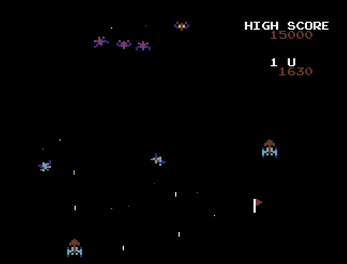