Pillars is based on the classic arcade game ‘Columns’ that was ported to most of the 16-bit home systems - indeed many people would have had it bundled with their Megadrive. However it seemingly never reached the C64 in the shape of either an official conversion or clone. Until now!

The aim of the game is to clear gems by matching three or more of the same colour horizontally, vertically or diagonally. As the gems fall you can move them left and right, or press fire to rearrange them. Create cascading combos to significantly boost your score, keeping an eye on the upcoming gems in order to plan ahead. The game is over when the column that gems arrive into is filled up.

In 'original' mode you simply aim to survive for as long as possible and get the highest score you can. Every 50 gems cleared increases level, giving a higher score multiplier but also a faster drop speed. If you have less time to spare you can opt for '3 minute' mode, with the aim to score as many points as possible within that time.

'2 player' mode allows two human players to go head-to-head, with the aim to outlast your opponent. In this mode creating combos sends a row of skulls to your opponent's board, raising their gems towards the top and you towards victory. These can be removed by clearing adjacent gems.

The settings menu allows you to customise the difficulty of the game, including the ability to give one player a handicap, useful if you are playing against someone with a much higher or lower skill level. There is also the option to change the gem colours to be slightly more distinguishable to those affected by colour blindness, or mute the music.

The game is available in .d64 format for play on real hardware or an emulator like VICE, MiSTer or TheC64. You can also try it out at the top of this page, however depending on your system/browser the audio may occasionally skip.

thanks for making this <3 super nostalgic and well made!

I have donated via kofi, I will download for free...

Sorry I didn't check this page before :)

Nice puzzler, played it today for around one hour and really like it. One question here. The Arcade game "Columns" offers the possibility, to be able, to switch through the sequence of colors in the falling piece in both directions. On the C64, because we have only one Firebutton, there is only one direction to switch through the colors now. But there are different possibilities in the meanwhile, that can change this.

For the real C64 there are adapters like the Gen-Assister for MegaDrive Controllers, that is plugged in both joyports of the C64 at the same time and then the user can have the function of the SPACE BAR on one of his buttons on the gamepad.

And in C64-emulators like for example HOXS, DENISE or CCS64 the user has a function that allows mapping of keyboard-keys to a button on the controller.

Then emulator-users could simply map the SPACE button to the second button on their controller (in the menue of the emu) and users of adapters like the mentioned Gen-Assister already have SPACE on their second button on the MegaDrive gamepad, as soon, as this adapter is connected to both joyports of their C64

Then all these users could play the game like the Arcade version of Columns can be played, with two buttons. And an additional keyboard-control of the game would also not be bad, there are not many keys needed, then all players could play with two buttons. Left/Right/Fire1/Fire2, that's all. Maybe that could be included too, but the first suggestion, with "SPACE-BAR, to switch colors in revers order" would be the most important.

What do you think about it? 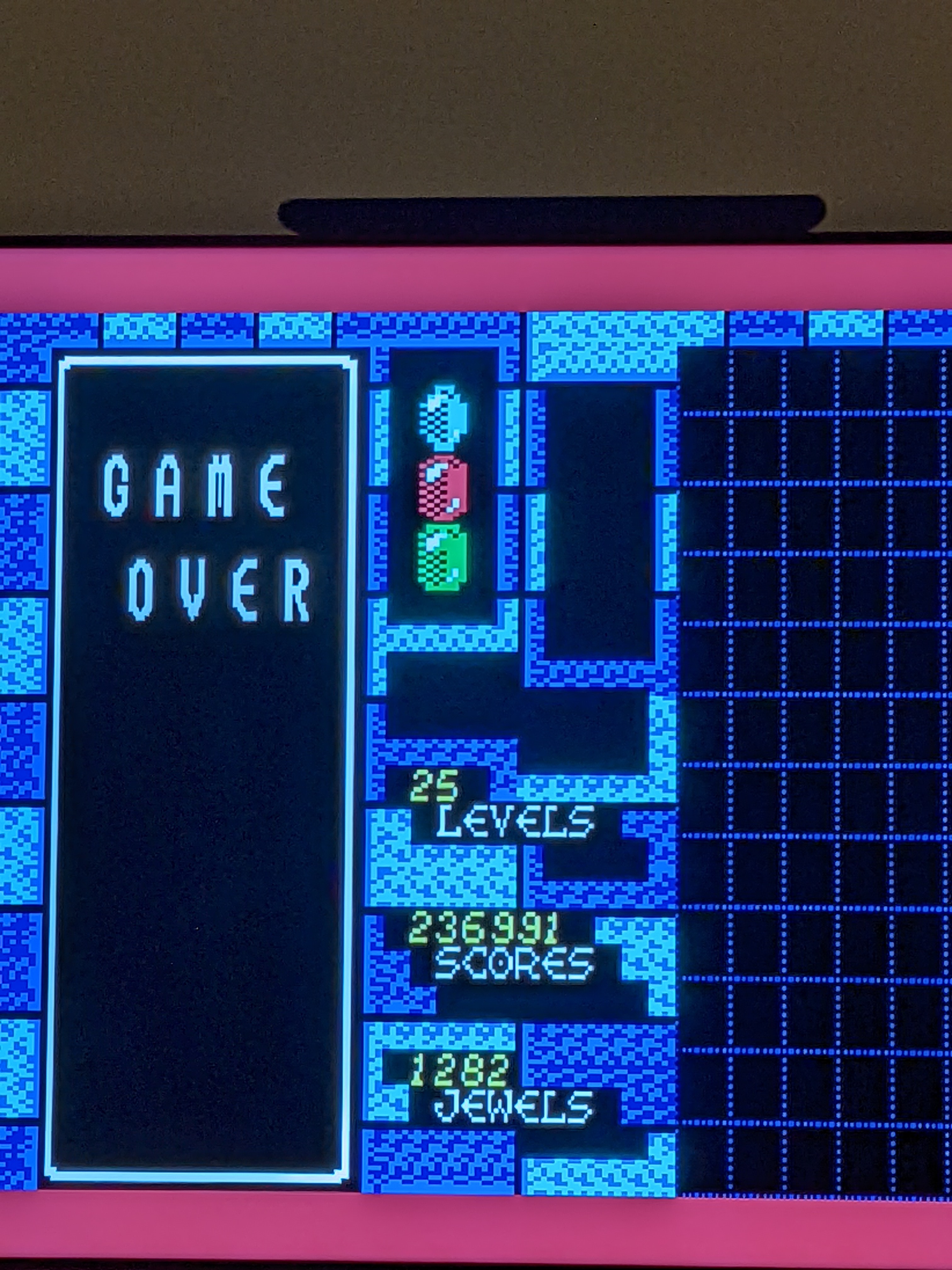 Quite the enjoyable title though I feel it's a bit on the easier side and could stand to be a little more difficult. When playing Columns on the Genesis, the game ramps up speed much much sooner.

It's a fair point, just going to upload a new version where the speed ramps up 3x faster, and also the maximum speed is increased.

Reply
The Games of C641 year ago

Another great game from ARLASOFT!  Please subscribe to my game play channel if you feel so inclined!  Thank you for creating all of the great software that you do!

Loved Columns back in the day's, great job with this! 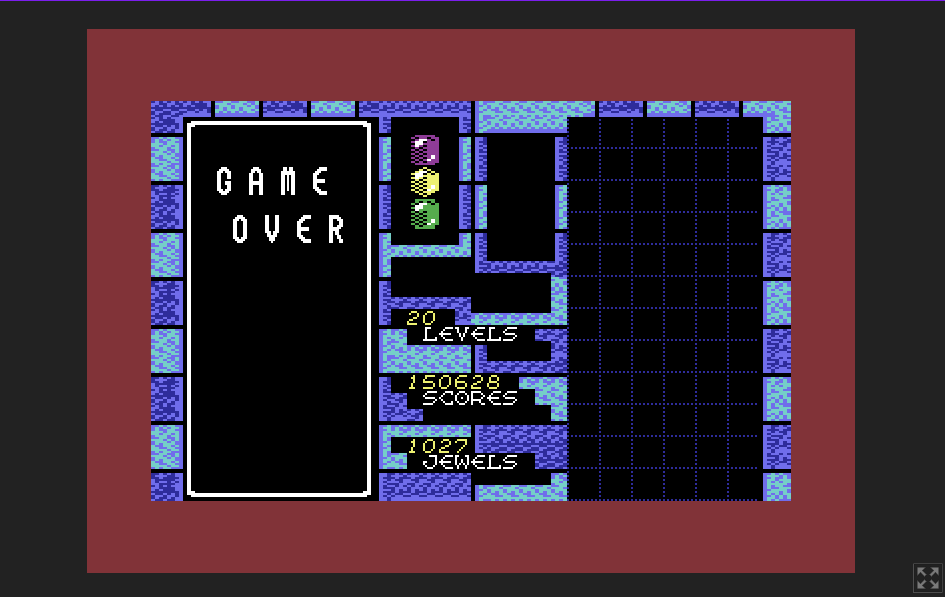 Excellent game and very addictive too! On my first "endless challenge", I scored nearly 60000 points! 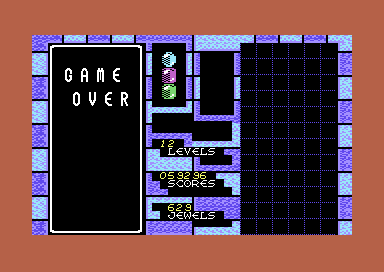 Very fun. Got hooked on it almost immediately. It's been 26 years since I last played it on the Megadrive while working in a game shop.

Wonderful! Beautiful and fun version of a game that always stood in the shadows of Tetris :3. 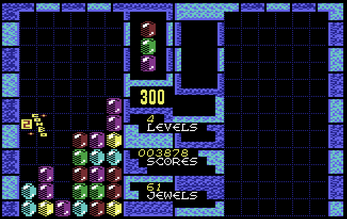 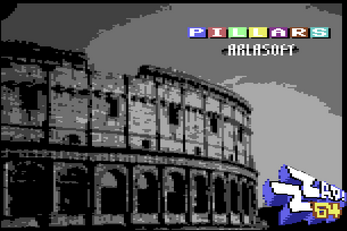 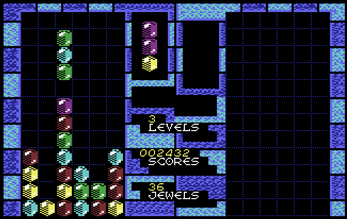 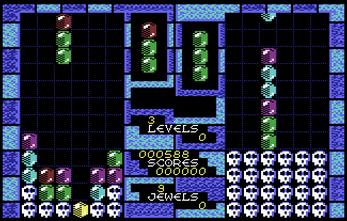 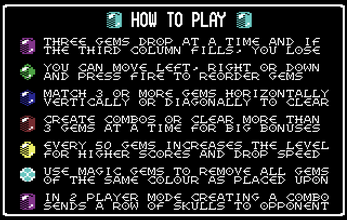 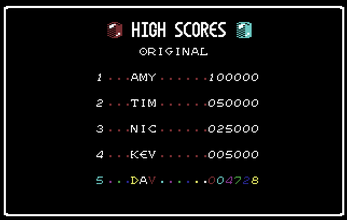 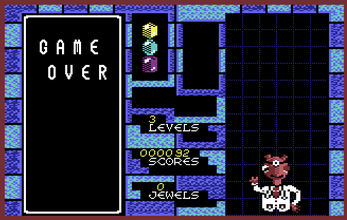